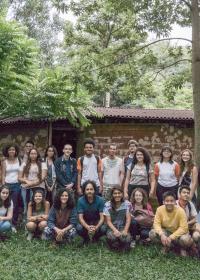 By Giselle Martins and Danilo Silva Guimarães, with contributions from Leandro Gonçalves and Silvia Nogueira of the Amerindian Support Network, Institute of Psychology – University of São Paulo, Brazil

Our Amerindian Network currently keeps regular conversations with eight Mbya Guarani Tekoa (place where the Guarani way of life is lived), building partnerships in line with academic projects of Culture and University Extension. Additionally, we organize ourselves to broaden the understanding of the different life contexts of indigenous communities both in and outside of Brazil, their struggle for human and civil rights, especially involving issues concerning land demarcation, differentiated education and health.  Faced with the crisis of COVID-19, we are maintaining weekly meetings through video conferences. Based on the guidelines reflected in these meetings, considering our scope of work and current conditions of operation, we have been seeking channels of communication with the indigenous communities with whom we have ongoing projects. The following is a summary of selected news items that we have come across regarding the situation of different communities and indigenous peoples in Brazil. At the end of this piece, we highlight the main challenges we are aware of, based on our ongoing conversations with the Mbya Guarani people.

Instituto Socioambiental (Socio-Environmental Institute - ISA) has developed a platform for monitoring the situation of indigenous peoples during the COVID-19 pandemic in Brazil with updated data from the official department of Special Secretariat for Indigenous Health, linked to the Ministry of Health (Brazil). They have outlined that people, in general, are immunologically susceptible to viruses that have never circulated before, such as COVID-19. However, they also acknowledge that indigenous people are more vulnerable to epidemics due to socioeconomic conditions and poor access to health services, which amplifies the potential for disease transmission. The limited accessibility to health services is, in part, due to the geographical distance of many services in relation to the communities, and the unavailability or insufficiency of healthcare professionals to assist them. Such issues in accessing adequate healthcare for indigenous peoples in Brazil remain despite such provisions being outlined in the Brazilian Constitution. ISA recognizes that the ways of life of many indigenous peoples in their traditional territories can result in forms of exposure to infectious diseases other than those to which people in urban areas are subjected. Most of these indigenous people live in community houses and share utensils, such as gourds, bowls and other objects, which increases the risk of infection (https://covid19.socioambiental.org/).

In addition to these challenges, we found, from daily news in the main media outlets in the country, that the Federal Government did not provide support to control COVID-19 in the most isolated indigenous communities. For example, the newspaper O Estado de São Paulo, released on April 13, 2020, reported that when the Ministry of Health sent a doctor to the state of Roraima, they stated that no transportation would be provided for this medical professional. The government acted against the rules of the official announcement appeal for doctors, according to which the transportation of professionals is the responsibility of the government program. In addition, the same newspaper reported that the Fundação Nacional do Índio (Funai), an agency linked to the Ministry of Justice and Public Security, received BRL 10,840 million in emergency resources in early April, supposedly destined to protect indigenous people against the advance of the pandemic. However, not a penny of this resource was used until the date of the report, when the country had already added at least nine cases and three deaths of indigenous people by COVID-19. The situation of the more than 800,000 self-declared indigenous people in the country is alarming, especially those living in the Amazon region, where the virus has spread rapidly. The journalist says that socio-environmental institutions across the country have been urging for days for the government to adopt crucial measures to protect indigenous people. They are doubly exposed to the risks of infection by this disease, not only due to the lack of infrastructure where they live, but also by the growing threats from squatters, prowlers and loggers advancing on their land.

Another problem faced due to the way the Brazilian government has dealt with the pandemic, is the lack of respect and knowledge of the authorities about the traditional ceremonies of indigenous culture. The investigative and independent journalism agency, Amazônia Real, noted that the first indigenous person who died due to COVID-19 was a 15-year-old teenager from the Yanomami people. He lived in a village from which illegal miners encroached, on the Uraricuera River, state of Roraima. Dario Yawarioma Urihithëri, vice president of the Hutukara Yanomami Association (HAY), a spokesman for the Yanomami Indigenous Land, said that the teenager's parents had not been notified of the burial. The Yanomami funerary ceremony, called Reahu, is one of the main rites of the Yanomami people; aiming so that the dead can follow their way and find their ancestors, in accordance with their worldview.

Chirley Pankará, elected the first indigenous State deputy in São Paulo, said that, unfortunately, more alarming than COVID-19 itself is the realization that the Brazilian government is the number one enemy of indigenous peoples. With social distancing, indigenous populations stopped circulating to protect themselves and as a result they stopped selling handcrafts, holding cultural workshops and receiving visitors, therefore the main sources of income of the indigenous people have become impaired with this crisis. In Greater São Paulo there are 12,000 indigenous people living in 30 communities and in urban context. So far, there is no government action to ensure that indigenous families and communities have basic conditions for survival, a situation aggravated by the pandemic. The indigenous people have not found ways to earn income to buy food, hygiene materials, to pay for rent, water and electricity. Chirley emphasizes that it is NGO supporters and the solidarity of friends who have helped traditional communities across the country.

The Agência Mural de Jornalismo das Periferias, produced a report with indigenous Mbya Guarani of the Indigenous Land of Jaraguá, in the northwest region of the district of São Paulo. According to its records, this is the smallest indigenous land in Brazil, with 512 hectares. Formed by houses made of wood and very close to each other, the place is conducive to a rapid spread of the virus. Within the village is a Basic Health Unit that exclusively serves the indigenous community. However, the facilities are still very precarious and need to be expanded to serve everyone. Concerning this issue and how to protect the elderly and children with respiratory diseases (risk group of COVID-19) the Guarani made a request to the Municipal Health Secretariat to appropriate the existing Education and Culture Center in the village to be used for the treatment of people from the community. This was so they could have better conditions if there are any cases in the village in need of isolation, in addition to acquiring protective materials such as masks, alcohol gel, gloves and also carrying out tests for quick action in the identification of sick people. However, so far the responsible bodies have done nothing concretely. In the report, one of the Guarani activist and guardian of the forest who still resists with the Mbya in that territory, Thiago Henrique Karai Djekupe, reports with concern: “The white man does not believe in the things that the ancients say. They are attached to the capitalist belief, they do not stop to see how much they suffer from all this. There is no balance between capitalism, the land itself and the environment. Capitalism, wherever it goes, it destroys. That's what ends up happening”.

Just over a month before the pandemic actually reached Brazil, the Mbya Guarani from Jaraguá started a fight for the creation of an Ecological Center for the Memory of the Guarani Culture Yary Ty, occupying land that was being deforested for the construction of more than 20 towers totaling 1,620 apartment units. In the advance of real estate speculation across indigenous territories, the construction company Tenda claimed that the construction aimed to meet the demand for social housing. However, as the collective network, Jornalistas Livres, reported after a series of protests and demonstrations, indigenous people, managed to argue in court that irregularities in the authorization process carried out by the city council at the commencement of the project conflicted with legal, constitutional and environmental acts.

Dialogues with people from indigenous communities with whom we have built partnerships with under the University Culture and Extension program have taken place over the phone and social networks. The communities have avoided visits by people who are not residents of the community as a protective measure to avoid spreading COVID-19. While these measures were announced by the Tekoa, in the early days of the pandemic in Brazil (in the week of March 12), the University also took a series of measures to interrupt academic activities or adapt them to the new scenario. Thus, the USP team of our Indigenous Network started to meet by videoconference, weekly. In the channels of dialogue with indigenous people in the communities, we note that, of the eight communities we consulted with regarding the current situation, six said they were managing to protect themselves from infection and were able to maintain their livelihoods through internal social organization and partnerships with supporters who mobilized to do online collections to bring supplies to communities. Two of them, however, were unable to establish partnerships that could assist them sufficiently in terms of food and hygiene supplies, generating great concern. We have been mobilizing, at that moment, as a team that has a series of limitations, to establish mediations that allow these communities access to resources necessary for survival, as well as to understand the situation and elaborate solutions consistent with our Amerindian worldviews.