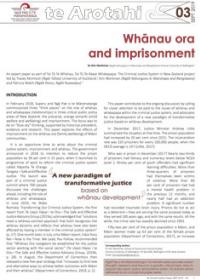 On Thursday 12 September, Ngā Pae o te Māramatanga New Zealand’s Māori Centre of Research Excellence (NPM) released its third Te Arotahi paper calling on government to pay even closer attention to the issues of whānau and whakapapa within the criminal justice system.  This paper advocates for the development of a new paradigm of transformative justice based on whānau development that values tino rangatiratanga and tikanga Māori.

In Whānau Ora and Imprisonment Sir Kim Workman asserts that “If the principle of tino rangatiratanga is fully acknowledged, then the development of a Kaupapa Māori justice system is an achievable outcome.”

The government has stated that it is committed to reducing the numbers of Māori in prison, and this paper provides the criminal justice sector with a clear pathway for disrupting the cycle of Māori mass incarceration.

Professor Tracey McIntosh notes that “prisons were not a part of our past prior to colonial settlement and we cannot continue to let them colonise our future.  The need for change is urgent.” This paper clearly lays out what we have learnt and what we need to do.

The state’s determination to ignore the Māori demand for tino rangatiratanga and the need for recognition of the concepts of ōrite, mana, tapu and motuhake strikes at the very heart of Māori justice.  We believe that government must recognise a Māori informed solution.

Sir Workman states that; “Such a strategy would include the full-bodied incorporation (rather than co-option) of tikanga Māori, take a whānau-centric approach to the management of prisons, focus on Māori assets and strengths rather than deficits, involve reciprocal engagement, and take collective responsibility for change.”

This Te Arotahi paper challenges the public sectors ‘business-as-usual’ approach, and urges a reconsideration of rangatiratanga within the criminal justice space. Rather than continuing the inward looking focus of our prisons and institutions, the paper encourages and promotes a “whānau-facing” prison system which affirms the role of the whānau in the process of rehabilitation. The researchers argue that by doing so, there can be a focus on working to restore the inmates’ mana, protect their tapu, achieve balance and, at the end of it all, re-establish the offender back to their community as a fully functioning human being.

NPM Co-Director Jacinta Ruru commented that this was another valuable paper to add to the Te Arotahi series, which breaks new ground in how we look at the criminal justice system and incarceration from a Māori world view. “It is encouraging to see yet more impact and guidance come from NPM projects, which can provide advice to government and policy makers focused on creating change that will have long-lasting and positive effects on our communities”.