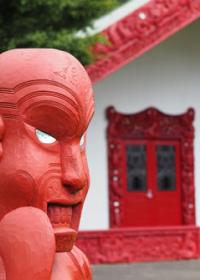 In a new initiative, Ngā Pae o te Māramatanga (NPM) New Zealand’s Māori Centre of Research Excellence is celebrating and recognising the careers of three Māori leaders and visionaries, who have a long history of bringing about major social change and impact in Aotearoa New Zealand.

“Ruānuku in the Māori world are those who deliver sage wisdom and knowledge and each of our Ruānuku will be providing insight, guidance and mana to the continuing directions and mission of Ngā Pae o te Māramatanga”.

“Our first three NPM Ruānuku have sustained prominent and distinguished careers as highly respected Māori knowledge contributors to our country.  They are esteemed scholars, visionaries in their fields, leaders in the life of our nation, and have brought about considerable social change in the lives of many Māori”.

NPM is recognising these inaugural appointments today as Māori and researchers from across the country begin to gather in Dunedin for the annual national Royal Society Te Apārangi Research Honours Aotearoa awards. This afternoon, at Te Tumu School of Māori, Pacific & Indigenous Studies, Māori senior students will lead the way in acknowledging Sir Mason, Sir Tīpene and Ngahuia, with students speaking about how these three have influenced their studies and inspired their career choices.

As New Zealand’s Māori Centre of Research Excellence, NPM provides an appropriate and ongoing environment for Ruānuku to engage with, especially in inspiring the next generation of Māori scholars and leaders.

Sir Mason is one of New Zealand’s most respected academics, and was knighted in 2010 for services to public and Māori health.  For over 40 years, Sir Mason has been at the forefront of a transformational approach to Māori health, including chairing the Taskforce on Whānau-Centred Initiatives that produced the Whānau Ora report for the Government in 2010.  He is a past Deputy Vice-Chancellor of Massey University.  Sir Mason previously served as NPM’s International Research Advisory Panel Chair and has been a valued past Principal Investigator leading research on the project Fostering te pā harakeke: Advancing Healthy and Prosperous Families of Mana.

Sir Tīpene is a highly regarded Ngāi Tahu kaumatua and academic.  He is a former long-serving Chair of the Ngāi Tahu Māori Trust Board, and led Ngāi Tahu through their formidable years of negotiating the Ngāi Tahu Claims Settlement. Sir Tīpene is the retired Assistant Vice-Chancellor Māori of the University of Canterbury, a Distinguished Fellow of the Institute of Directors and held a 28 year term on the New Zealand Geographic Board. He holds Honorary Doctorates from the Universities of Canterbury, Lincoln and Victoria University of Wellington. Sir Tīpene is NPM’s longest Board Chair (retired in the role in 2018, after serving 12 years).

Ngahuia has a long legacy of working with our research teams nurturing PhD students as well as new and emerging Māori academics and supporting the excellence in our research. With degrees in Art History and English, her PhD (1981) was in psychology. This experience contributed to her writing an early (1991) monograph on Māori research ethics. For years she worked in the heritage and creative sectors, as a curator, governor, and activist/advocate. Her research interests include gender issues, museums, body modification, power and powerlessness, spirituality and ritual. She was a co-leader of the Tangi Research Programme which explored Māori ways of death, and the Principal Investigator on the NPM project which is part of this - Aituā: Death in a changing Māori World. In 2010 Ngāhuia was appointed a Member of the New Zealand Order of Merit for services to Māori culture; in 2016 she was made the inaugural Mareikura or Matriarch of the the Pae Akoranga Wahine: Women's Studies Association of Aotearoa/New Zealand, and in 2017 she received the Pou Aronui Supreme Award from the Royal Society of New Zealand for outstanding service to the arts and humanities. Ngahuia is the first Maori female Emeritus in Aotearoa at the School of Māori and Pacific Development, at the University of Waikato.