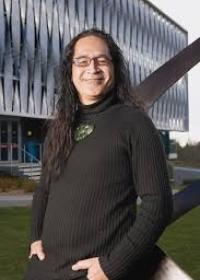 Vincent Malcolm-Buchanan passed away in Auckland on Saturday 1 June, after a period of intense illness.  Aligned with Ngāti Whare of Te Whaiti, and Ngāti Pikiao of Rotoiti, he was an exceptional teacher, exemplary scholar and sensitive mentor. As a youth in Rotorua, he dazzled tourists on the concert stage, and pursued a career in hospitality. Contact with overseas visitors prompted him to aim much higher, and he commenced a degree in Religious Studies at Canterbury in the early 2000s. Vincee transferred to Waikato, completing his BA in Religious Studies & Anthropology in 2006. He stayed in Anthropology for his BSocSc (Hons), where he attained an MSocSc (Hons) in 2009. His thesis Fragmentation and Restoration : generational legacies of 21st century Māori explored issues of conflict and compromise.

Vincee’s loquacious manner, his flamboyant style, his infectious enthusiasm, his gentle, nurturing spirit, and his occasionally assumed gravitas ensured his popularity with students and with staff. He was greatly admired and sought after as a sessional assistant during his higher degree period, tutoring across the disciplines of Māori Studies, Anthropology and Religious Studies. He understood the meaning of excellence, and firmly accepted no less from his students. Everyone knew him as Vincee. He was a privilege and a pleasure to work with, and became a pivotal researcher/administrator in the Tangihanga Research Programme, sponsored by Ngā Pae o te Māramatanga (NPM) and the Marsden Fund. During this time, he presented conference papers in Auckland, Wellington, Sydney, Perth, Honolulu and Waikato, and went on to publish this work. This culminated in his ground breaking doctoral study A Genealogical Ethnography of Tangihanga: our taonga, our stories which considered aspects of traditional death ritual today. On completing the PhD, he moved to Auckland University, and contributed to the Papakainga development project at the School of Engineering, and then transferred for a brief time with the Sir James Henare Māori Research Centre. His most recent, ongoing appointment to the Business School was a cunning amalgam of his exuberant youth in hospitality, and his later years of stellar academic achievement. Dr Malcolm-Buchanan lectured on contemporary Māori and Pasifika issues and experience to short term international students, involving them with Māori communities throughout the region. He is still very warmly remembered on those many marae he visited with his travelling groups.

Throughout his evolution as a significant intellectual change maker, Dr Malcolm-Buchanan participated fully in various NPM programmes and initiatives. He worked closely with the MAI programme at the University of Waikato, and was a summer intern in 2007-2008. During the Tangihanga Project, he received a conference grant in 2011 to present papers in Sydney and Perth, and his doctoral completion was reassured by a bridging grant in 2014, the year in which he was also supported by a Fulbright-NPM Travel Award that facilitated his presentations in Alberquerque and San Diego. Aware that his PhD work was immensely important to the wider understanding of tangihanga in contemporary times, in 2017 he began to prepare a manuscript for publication, assisted by a NPM publication support grant. He was working on this throughout his illness including at our most recent NPM Writing Retreat held 6 months ago at Te Whare Wānanga o Awanuiārangi.